Home > Sailing Extra > Buying a sailboat without having seen it before 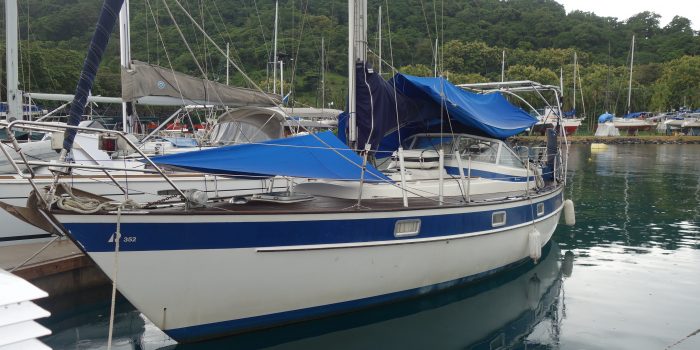 Buying a sailboat without having seen it before

After having sold Maya our 26 feet long Nord 80 we were looking for a sailboat in Europe. My goal was to find a Hallberg-Rassy 352 or a nice 36 to 37 feet Sailboat made of aluminium.
Our Budget – after selling a lot of things as our sailboat, my van, my SUP and a lot of other things – was not more than 40.000 USD. Finding a HR 352 or a aluminium sailboat in this price range is not easy.
But after an intense research I found a nice aluminium yacht in the Netherlands. After some phone calls we decided to go to holland to have a closer look at it. But one day before leaving I got a call from the broker telling me that the boat had been sold.

So I decided to spread my research internationally and I found another nice aluminium boat in Panama. It seems to be the perfect boat for us – 37 feet, built at a french yard and outside it looked like an Alubat and inside it had a nice setup.

But after having paid 10% to the broker to have the possibility to make a survey, we realized that the pictures of the boat were 10 years old. So the real condition of the boat was a nightmare. The corrosion at the hull already made some holes in it. But we had the luck that the borker offered another sailing yacht which we were interested in – a Hallberg-Rassy 352.

Again a friend of mine made a survey and this time we had luck. The HR 352 was in a good shape – some things to repair but all in all in a pretty good condition.
So we decided to buy it. We bought the Hallberg-Rassy without seeing it before.

Here are some facts which I learned in the last weeks and which are helpful if you plan to buy an used sailing yacht without seeing it before.

1. Find a person (near your sailboat) who you trust and who has great knowledge in sailboats.
2. Ask this person to make a survey of the boat and a lot of pictures (close-ups) and if possible videos (a survey made by a person who you trust, is much better than a survey made by a company).
3. Tell the person to open everything in the boat which is possible to open and make photos of it (the floor, the engine, the sails, the hull,…).
4. After the survey speak wit this person and ask him/her everything what you want to know about the boat.

Why we start „The Sailing Family“